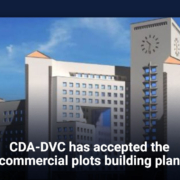 A group called the Design Vetting Committee (DVC), which is part of the CDA, approved the building plans. The meeting took place at the headquarters of the CDA, which is where it took place. There was a meeting where the eight applications for building design approval were talked about. There was a meeting, and the committee agreed to seven of the designs that were shown. These are the plans for the building that have been approved by the city:

An important news storey says the CDA set up a committee to look over the CDA Ordinance 1960. A lot of land was bought this way. The committee wants to get rid of lawsuits and make the process of buying land more open and acceptable to the public. As part of its job, the committee will propose changes to sections 2(k), 12(2)(g), and 32-A of the CDA ordinance, as well as other parts of the CDA.