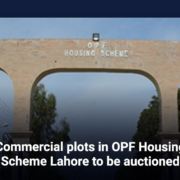 Those outside Pakistan and the rest of us can get a great deal at the auction, which will be held “as is, where is.” During the OPF Head Office in Islamabad, it will take place on May 9 at 2:00 pm (1400 p.m.). Non-resident Pakistanis (NRPs) get 60% of the plots, and Pakistanis who live in the country get 40% of the plots. NRPs, on the other hand, can bid on plots that have been set aside for Pakistanis who live in the country.

It says that if you want to be an NRP, you have to be an OPF member before you can bid on jobs. The open auction of plots in the OPF Housing Scheme is open to the general public, Pakistanis who live outside of Pakistan, and their lawyers. There is a non-refundable fee of PKR 5,000 to get event brochures from the Housing and Works Division until May 7. On the day of the auction, no-bid tokens will be given out, and they will not be sold. As a follow-up, please check out the OPF’s official website for terms and conditions.