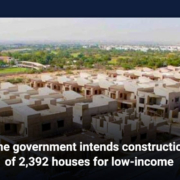 The government intends construction of 392 housing units for low-income groups on state land of Sangjani neighborhood Islamabad as part of the Naya Pakistan Housing Project (NPHP).

The housing project in Sangjani and the project concept (PC-I) for the housing scheme is approved, Ministry of Housing and Works sources said. According to sources, land transfer and other housing-related modalities were in the works for the housing scheme. They stated that approximately 45,000 units of affordable housing were currently under construction across the country.

According to the source, 11,000 housing units are currently under construction in Lahore, Nowshera, Islamabad’s Alipur Farash, Islamabad’s Zone-V, and Sargodha.

According to sources, 10,000 low-cost housing units are under constructed in Punjab’s 20 districts. Monthly mortgage instalments for these houses, they stated, would be less than Rs10,000 per month. They stated that 19,298 affordable housing units are completed, with Akhuwat financing 15,734 of them.

According to sources, despite the government’s facilitation and incentives, the private sector is also interested in affordable housing, has submitted 230 proposals to the Naya Pakistan Housing and Development Authority for constructing over 3 million housing units throughout the country.

Read more with EL news : MDA conduct an auction of 100 commercial plots in Schemes 45 and 25-A

They stated that 48 projects totaling 70,000 housing units are shortlisted, and negotiations have begun with 42 private parties. Despite government facilitation and incentives, sources indicate that the private sector is also interested in affordable housing and has submitted 230 proposals to the Naya Pakistan Housing and Development Authority for the construction of over 3 million housing units across the country.