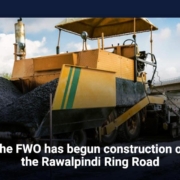 FWO started building the Rawalpindi Ring Road project on Monday, and it will be finished by the end of the year.

Construction work began at Thallian and the ribbon was cut by RDA Chairman Tariq Mehmood Murtaza.

The Director General of the RDA, Tahir Zafar Abbasi, was there, as well as the Chief Engineer of the RDA, Dr Habib ul Haq Randhawa, the FWO team leader, Col Muhammad Irfan, and other people.

He said that the construction of the 38.3 km long main road from Baanth (N-5) to Thallian (M-2) would be done in two years under the supervision of the RDA. He said the RDA had given the FWO the contract to build the Rwp Ring Road for $22.8 billion. He asked the authorities to finish the project in the shortest time possible. He said that the main goal of the project was to cut down on the amount of traffic on the roads of the two cities, Rawalpindi and Islamabad.

During the event, Chief Engineer RDA Dr. Habib ul Haq Randhawa gave a detailed explanation of the Rwp Ring Road project. Randhawa said that the length of this project would be 38.3 km.

Engineer: The speed at which we want to go will be 120 km/h, the chief engineer said The Ring Road would have six lanes and five interchanges. It would start at the National Highway (N-5) at Baanth and go through Chakbeli Road, Adiala Road, Chakri Road, and Thallian Interchange. It would end at the motorway (M-2) at Thallian Interchange.

As he said, the Rawalpindi Ring Road would solve the traffic problems by connecting N-5 to M-2 and giving people another way to get around.