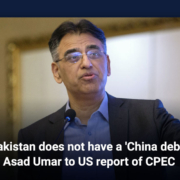 Addressing a press conference in Islamabad, the planning minister admitted that Pakistan faced debt servicing and sustainability challenges but emphasized that “we do not have a China debt crisis.”

He remembered that the report cited four significant concerns regarding CPEC:

Umar dismissed the concerns, stating that I had disclosed the information about CPEC projects numerous times and that Senate and National Assembly committees had even had their questions addressed. “It is subject to parliamentary monitoring,” he explained.

Umar stated that the National Electric Power Regulatory Authority had data on energy and power projects. The government had supplied information regarding CPEC to the International Monetary Fund from the commencement of the initiative.

He said that in other situations, the government employed sovereign guarantees or standby loans to support the private sector in investing rather than providing funds.

According to Umar, CPEC loans for private power projects were significantly less expensive than loans from other international institutions such as the World Bank or the Asian Development Bank.

He stated that the vast majority obtained at a discounted rate of 2% concerning infrastructure loans.

According to Umar, China contribute additional funding for other CPEC projects, and when these are included, “the average rate of government-to-government loan is less than 2%.”

According to the planning minister, the material had been disseminated “before” and was being reiterated in light of the report’s media prominence.

‘China’s debt accounts for less than 10% of Pakistan’s total debt.’

Concerned that Pakistan’s debt had reached a “dangerous level,” he stated that Chinese debt accounted for only 10% of its total debt (internal and foreign) and 26% of its external debt.

“So although 74 percent of the [loan] money we obtained from the rest of the world — primarily from the West and multilateral agencies — does not imperil Pakistan, the other 26 percent does? It is an entirely erroneous argument, “he contended.

He asserted that Pakistan’s debt sustainability troubles are not the result of Chinese loans but instead of the country’s problems.

“Under those conditions, only Chinese investors came to establish [power plants]. Thus did not this strategy for the Chinese alone, but for the entire world,” he explained.

Rather than to broadcast them “without adequate verification and understanding.”

Adding that “this is neither good journalism nor does it serve Pakistan.”

The first phase of CPEC did not intend to generate jobs. He referred to industrialization enterprises, industrial investment, manufacturing, and agricultural endeavors.

Umar stated that Pakistan and China would welcome more nations’ participation in CPEC. He said that it would be a “excellent concept” to make it a regional corridor, which “Pakistan will fully support.”

Additionally, the minister urged the international community to preserve financial ties with Afghanistan and participate in the country’s development process.