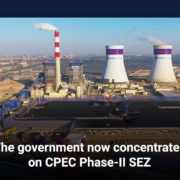 The government now concentrates on CPEC Phase-II SEZ. The chairman of the Board of Investment (BoI), Muhammad Azfar Ahsan, said that the development of Special Economic Zones (SEZs) as part of the China Pakistan Economic Corridor (CPEC) Phase II is the main goal of the government.

Used to build the CPEC project have been repaired, and a parliamentary committee has been set up to look into the project.

At a CPEC Industrial Cooperation B2B Investment Conference, nine out of three SEZs are already being built. Among them are the projects in Sindh, Khyber Pakhtunkhwa (KP), and Punjab: Dhabeji SEZ in Sindh, Rashakai SEZ in KP, and the Allama Iqbal Industrial City SEZ in Punjab.

Besides that, the chairman said that the businesses and developers who set up in the Special Economic Zones were given money. In addition, the imports of capital goods were not taxed for 10 years.

As of this writing, 70 businesses have been given active SEZ status.

Khalid Mansoor, a Special Assistant to the Prime Minister (PM), said that the government will focus on four Special Economic Zones (SEZs) this year.