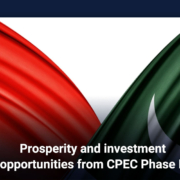 Prosperity and investment opportunities from CPEC Phase II. According to news reports, Chairman of the China Pakistan Economic Corridor (CPEC) Khalid Mansoor stated that the launch of CPEC Phase II will bring wealth and job opportunities to the country.

In his remarks to a delegation of 70 Chinese companies, he stated that the government gives significant advantages for industrial development in Special Economic Zones (SEZs), including a 10-year tax break for foreign investment.

Read more with EL news : For the Sambrial-Kharian highway, 64 villages will be purchased

According to the specifics, he stated that the government is paying particular attention to the development of all nine SEZs. According to the chairman, four of the nine SEZs are in advanced stages of development, with colonisation having begun in two of them. He stated that developing the China-Pakistan Economic Corridor CPEC Phase II will provide wealth to both countries and deepen bilateral ties between them.

According to Asad Umer, Minister of Planning and Development of Pakistan, more Chinese enterprises should investigate areas of investment in Pakistan’s industrial sectors to boost employment and Foreign Direct Investment (FDI). He explained that the government has decreased import levies on capital items for industrial units to stimulate more colonisation of Special Economic Zones (SEZs).

Read more: CPEC enters a new era of high-quality growth, according to the National Development and Reform Commission.

Both countries consider the project to be a showpiece effort, with China pledging to invest USD 62 billion over the next decade in a variety of areas such as agricultural, road infrastructure, industrial zones, and power generation. Prosperity and investment opportunities prospects resulting from the completion of CPEC Phase II