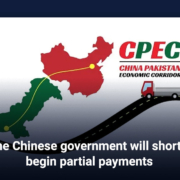 The Chinese government will shortly begin partial payments. The government is anticipated to make partial payments from approximately $1.4 billion in payables in the coming days to allay the fears of Chinese enterprises investing in independent power producers (IPPs) and other projects.

“We are making every effort to clear at least some of the payments as soon as possible,” a senior government official told Dawn, adding that the payables of power producers working on the China-Pakistan Economic Corridor (CPEC) had exceeded Rs230 billion (about $1.4 billion). Chinese investors had been lobbying against this at the highest levels of government. The Chinese government will soon begin making partial payments.

Meanwhile, despite comprehensive security cover given by the Pakistan Army, the Chinese contractors working on the Dasu Hydropower Project, which is not part of the CPEC, have not restarted construction activities they suspended more than two months ago following a terrorist attack.

The debts of power producers involved in CPEC have surpassed Rs230 billion.

They have, however, highlighted the subject of compensation claims for returning to work, which might be resolved through fair negotiations in existing channels. Still, construction work should begin immediately, a senior official said.

He noted that Chinese contractors had similarly ceased work on the Mohmand Dam following a similar incident but had resumed work following nearly a week of bilateral meetings.

“While payment is a concern, no business has yet issued a default notice following the terms of the Power Purchase Agreements,” an official said. He explained that dues have accumulated due to late payments. The government pledged to establish a revolving fund to automatically assure prompt clearance of rights to the IPPs under CPEC through consumer bill recovery, but this could not be implemented.

In answer to a question, he stated that there were no coal shortages at any of the three coal-fired power facilities — Hubco, Sahiwal, or Port Qasim — with a combined capacity of approximately 4,000MW. Furthermore, with 660MW, Thar Coal Power Project is entirely dependent on local coal and faces no supply constraints. The Chinese government will soon begin making partial payments.

According to the official, all coal-fired power plants were on a ‘high dispatch order’ due to their cheaper fuel costs. However, the government will continue to guarantee payment of fuel costs.

The issue is with capacity payments, on which the government has never defaulted on a loan. However, the sponsors’ expectation of a return on equity was legitimate, but due to various difficulties, they could not payments on time. The Chinese government will soon begin making partial payments.

According to officials, Khalid Mansoor, Special Assistant to the Prime Minister (SAPM) on CPEC Affairs, has been liaising with the appropriate agencies to expedite some payments.

Read more with EL news : Chinese companies are irritated by the slow pace of work on CPEC

“The Chinese businesses have been tolerant, and there is no indication that we are about to default.”

In response to another query, the official stated that the two countries have close ties and have begun preliminary negotiations on re-profiling the debt component of CPEC’s IPPs.

“They avoid harsh measures or issuing notices in favor of resolving issues at the government level,” the official explained. “Arbitrations are worthless; collaborative connections are critical.”

He stated that the difficulties included payments to IPPs, long-overdue dues, the introduction of a revolving account for automatic payments, and the increase in the withholding tax on sponsors’ earnings from 7.5pc to 25%.

He stated that the authorities were now considering establishing an Investment Facilitation Center to provide a single point of contact for all Chinese investors. He said that 135 Chinese businesses were functioning in Pakistan on CPEC and other projects, and the key goal was recovering the trust of people working on CPEC initiatives. The Chinese government will soon begin making partial payments.

Saleem Mandviwala, a former finance minister and current chairman of the Senate Standing Committee on Planning, stated during a committee hearing that the Chinese were complaining that a showpiece CPEC project had been wrecked during the last three years, leaving many businesses unhappy.

However, Planning Minister Asad Umar later stated during a news conference that his government has completed a significant portion of the CPEC and that lawmakers should remain cautious while discussing important programs. The Chinese government will soon begin making partial payments.