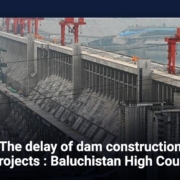 Because of certain technical reasons as well as the orders of the Baluchistan High Court, the government of Baluchistan has decided to cancel the pre-qualification process that was going to be used for the construction of two water storage dam projects in the southern Awaran district and the western Panjgur district.

The announcement that the pre-qualification procedure, which had been begun on February 16th, had been cancelled “due to unavoidable circumstances” was made by the project directors of the two dams through ads.

According to Abdul Fatah Bhangar, Secretary of Irrigation for the province of Baluchistan, the process had been advertised on the website of the Baluchistan Public Procurement Regulatory Authority three months before to Dawn’s report. According to what he claimed, the Baluchistan High Court made some observations and issued some orders, and as a result, the event was cancelled. After a thorough examination of the terms and problems with the technological aspects, he stated that the procedure will be redistributed very soon.

“The government has not abandoned these projects,” he said, adding that building these two dams was important to address the water scarcity in the Awaran and Panjgur districts. “These dams are necessary to address the water shortfall in the Awaran and Panjgur districts.” Grok dam in Kharan, Gishkaur dam in Turbat, Balozai dam in Qila Saifullah, Winder dam in Lasbela, and Saul dam in Pasni are among the five additional water storage dams that are now under development in various areas of Baluchistan. Saul dam in Pasni is the largest of these five dams.

Mr. Bhangar had high hopes that the projects would be finished on time and that the dams would solve the problem of a lack of potable water in these districts in addition to making additional land available for cultivation.

According to a report the month of March, at least 64 of the 100 dams that were planned to be constructed in Baluchistan by the federal government have already been finished.