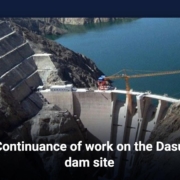 ‘Continuance of work on the Dasu dam site’. Zhao Lijian, a spokesman for the Chinese Foreign Ministry, said that media reports that the Chinese contractor had left the Dasu dam project site were not true.

On Thursday, Zhao told the International Press Center (IPC) that he didn’t know if the contractor had set any rules for restarting work on the dam site.

That situation you talked about isn’t one I’ve heard of. Dasu hydropower project: “As far as I know, it’s back up and running.”

In July, ten Chinese and four Pakistani nationals were killed in a terrorist attack on the dam site. Another 28 people were hurt. He said that the China-Pakistan Economic Corridor (CPEC) was moving forward even though a strong wind was coming from the virus.

People who say there has been a slowdown in work on CPEC, which is part of the Belt and Road Initiative (BRI), don’t believe him.

Mr. Zhao said that CPEC was based on the idea of joint consultation and making a contribution for the benefit of everyone. In the last few days, the president of Pakistan, Dr Arif Alvi, Prime Minister Imran Khan, and some media have all said good things about the CPEC flagship project’s progress.

A spokesperson said it took a lot of money to build the train, and the authorities who were involved were talking about it.

He said “pure disinformation” had been spread about the CPEC project in the past three and a half years. ‘Work on the Dasu dam site is still going on.’