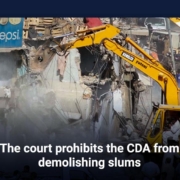 The court prohibits the CDA from demolishing slums. On Tuesday, Chief Justice Athar Minallah of the Islamabad High Court (IHC) restrained the Capital Development Authority (CDA) from carrying out an operation against a slum in Islamabad’s Sector E-11.

The high court halted the CDA’s warnings to slum inhabitants and directed the civic body to first dismantle an unlawful factory adjacent to the slums.

The IHC was informed that the land will be cleaned due to its status as a green belt. The court was also informed that an unauthorized structure had been built in the area in contravention of the law.

The court inquired as to who provided the factory’s no-objection certificate (NOC). If the CDA issued the NOC, shouldn’t it satisfy the court that it was issued following the applicable law?” The court stated that slum inhabitants have rights as well and that the court would not permit their rights to be violated.

Three lawyers, Adnan Haider Randhawa, Omar Ejaz Gilani, and Daniel Hassan, testified during the court that they visited the slums in E-11 as amicus curiae and submitted a report highlighting the operation of a factory adjacent to the slum.

CDA lawyer Hafiz Arafat informed the court that while notices have been issued to slum dwellers, no operation has yet begun.

The chief justice of the IHC enquired how the factory was erected in that location.

Was that on land that had been acquired? “I believe the area on which the factory was erected belongs to forces headquarters,” the CDA official responded. The chief justice of the IHC inquired whether the CDA was issuing notices to slum inhabitants but also taking action against the industry.

The judge, expressing his rage at the CDA, stated: “Is there no law here?” Is there no regulation in this instance? Every day, the court is astounded by people’s ability to do whatever they want. You see only slum inhabitants, but not the factory?

The CDA official stated that he will bring the matter to the member planning’s attention. The chief justice of the IHC stated that it was not a matter of bringing it to someone’s attention. If the factory is illegal, then you must intervene. If you cannot see the factory, how are slum inhabitants to be seen?

The court prevented the CDA from conducting an operation against the slums unless the factory was also targeted. It directed the CDA to immediately dismantle the factory if it is illegal, even though it is owned by NLC, and to notify the court.

The court continued the case’s hearing until January 10.