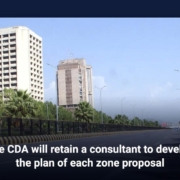 Islamabad’s city managers have hired a consulting firm to help them develop a zone plan for the city. The CDA’s Development Working Party (DWP) is meeting today to talk about, among other things, how to hire a consultant.

Dawn has the agenda for the meeting, and it says that PC-11, which is used to do a survey and come up with a development/zoning plan for Islamabad (other than Zone I), will be discussed.

According to its ordinance, the CDA is in charge of all buildings and homes in Islamabad. However, it kept itself in Zone I, where the sectors are. This led to unauthorized constructions sprouting up all over the place.

Zones III, IV, and V are full of illegal buildings because the CDA didn’t try to enforce its rules there until 2017.

Zones IV and V were the focus of the civic agency later. There had already been a lot of construction there

There are a lot of illegal housing projects where people are already living, and many more are being built. This group was made up of three people on the commission who looked at the master plan for Islamabad and two other people. The Ministry of Interior chose them in August of last year.

However, even though six months have passed, there hasn’t been any progress in this area. Sources in the CDA said that new rules are needed to deal with some things.

There are rules now that say no construction can be done on private land in Zone III, so they said that was the case. But people have built a lot of things on their land because the CDA didn’t do anything to control private land in the zone. Many very crowded areas, like Shah Allah Ditta, Bhara Kahu, Kot Hatyal, and Banigala, are in Zone III, which is the third zone.

The rules for Zone IV need to be changed to make sure that the 23,618 acres of Zone IV, which includes agro farming, nature conservation, sports and recreation projects and hotels, theatres, polo grounds and golf courses.

Zone III and sub-zone D of Zone IV have already been talked about by the master plan commission, says a representative of the CDA.