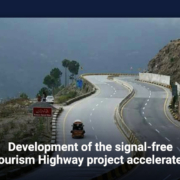 Rawalpindi: According to news reports on August 1, the Punjab government has accelerated work on the 123-kilometer modern signal-free tourism highway project. By March 2024, the 4.27 billion PKR project will be finished. The project contractor reportedly stated that 40 percent of the construction on the 32-kilometer-long portion from Pindori Chowk to Brure has been finished in a briefing to the local politicians. While the second phase of the project’s development will get underway in August.

The contractor added that in addition to creating multi-story, earthquake-resistant structures on both sides, all properties along the road will be turned into businesses. Along the roadway will also be erected industrial zones, modern parks, and picnic areas, in addition to educational institutions. The mentioned tourist highway will run from Pindori Chowk in Kalar Syedan to Lower Topa in Murree, according to Project Concept-1 (PC-1). When finished, the road will be the only “tourism corridor” linking Gilgit-Baltistan (GB), Galiyat, and Azad Kashmir. The highway would connect to five significant thoroughfares from regions including Azad Kashmir, Islamabad, Rawalpindi, Great Britain, and others.
This is where it should be mentioned that the project was launched in October 2021. As one of the major projects aimed at encouraging tourism in the nation, the government has allotted cash to finish the project.