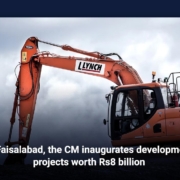 Read more with EL news : Pakistan railways has decided to increase the fares

In addition, the CM announced the building and upgrade of five roads worth Rs 300 million as part of the Rural Access Program and the repair and maintenance of Model Bazar Jhang Road for Rs 180 million.

These enhancements should occur as soon as possible. This year, development efforts will intensify and accelerate. Their accountability requirements have been tightened to ensure their completion and rapid development. Pakistan’s GDP has grown at a rate of over 5% and per capita income at a rate of approximately 2% per year for the fifty years since independence. This dramatic acceleration of the economy’s growth pace was accompanied by periods of uneven development. In Faisalabad, the Chief Minister inaugurates development projects worth Rs8 billion.

Pakistan, a developing country, is attempting to accelerate its economic growth in order to keep up with the pace of the rapidly emerging economies in the region. Pakistan is dealing with major environmental difficulties, particularly in the form of water scarcity, energy shortage, air and water pollution, and the loss of natural resources, among other things.

Pakistan’s GDP is expected to increase by 1.3 percent in 2020-21, according to the World Bank’s projections. The International Monetary Fund (IMF) expected 1.5 percent growth, whilst the State Bank of Pakistan (SBP) predicted 3 percent growth. Official (provisional) estimates of roughly 4 percent increase in GDP, on the other hand, far exceeded all predictions. In Faisalabad, the Chief Minister inaugurates development projects worth Rs8 billion.