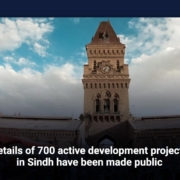 Sindh’s Minister for Works and Services, Syed Zia Abbas Shah, said on March 22 that the province is working on 700 development projects.

As he was holding a high-level meeting of the department, the minister told everyone in charge to make sure the schemes kept going. The Secretary of Works and Services, executive engineers, superintending engineers, provincial chief engineers, and other officials also came to the meeting.

These are some of the things that Sindh’s development projects are up to: