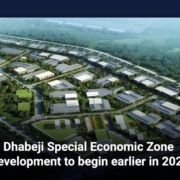 Qamar stated during a press conference on Tuesday that the project will create 100,000 direct and indirect jobs. He announced that the Sindh government had awarded a letter of award (LOA) to a private contractor for the Dhabeji Special Economic Zone (SEZ) project.

“Russian and Chinese investors expressed far greater interest in the SEZ than the government anticipated,” he said.

Qamar emphasized the importance of creating jobs to improve economic conditions, which had deteriorated due to persistent inflation.

“Megaprojects such as the Dhabeji Special Economic Zone will undoubtedly generate a greater number of jobs,” he gushed.

He emphasized that the SEZ was a priority project for the China-Pakistan Economic Corridor’s industrial cooperation phase (CPEC).

Sindh’s government determined that the scheme would be implemented through an international competitive bidding process in the public-private partnership (PPP) mode.

The PPP board finalised the developer for Dhabeji SEZ in its 34th meeting, adding that the bidding process was conducted fairly and transparently according to Sindh Public Procurement Regulatory Authority rules.

The developer, who was chosen based on the best value for money, would be responsible for providing all utilities, constructing infrastructure, and operating and maintaining the SEZ.

Qamar stated that the Sindh government ensured the provision of utilities and direct access by connecting Port Qasim and the National Highway via a dedicated route, thereby transforming Dhabeji into an economic and commercial hub of industrialization near Karachi.

Provincial and federal governments have committed to investing more than Rs12 billion in external infrastructure and facilities to create an enabling environment.

Additionally, he stated that a consortium of consultants – EY Ford Rhodes, EA Consulting, and RIAA Law – was hired via a competitive process to assist developers in soliciting the SEZ.

He stated that The provincial government authorised Sindh Economic Zones Management Company (SEZMC) to develop and manage Dhabeji SEZ to bolster Sindh’s industrial base under Section 42 of the Securities and Exchange Commission of Pakistan.

Abdul Azeem Uqaili, Chief Executive Officer of SEZMC, stressed that the second phase of CPEC was focused on industrial cooperation, with the Dhabeji SEZ being built as part of this phase. He said the project would reintroduce industrialization to the Karachi area, adding that the zone would directly or indirectly create around 200,000 jobs.