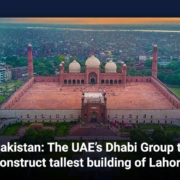 United Arab Emirates has agreed to spend Rs60 billion in Pakistan’s Punjab province, with a big focus on the construction industry. The UAE’s Dhabi Group to construct tallest building of Lahore in Pakistan.

Sheikh Nahyan Bin Mubarak, the UAE Minister of Culture, Youth, and Social Development, said this during a meeting with Punjab Chief Minister Usman Buzdar in Dubai.

He also said that he wants to build a new skyscraper in Lahore, Pakistan, that will be very high-tech, on the banks of the Ravi River there. The multi-story building will be called the “Mubarak Center.”

According to a spokeswoman for the Punjab government, the chief minister has said that the UAE can count on his full support in its investment efforts.

Adviser for Commerce and Investment Abdul Razak Dawood said last December that a UAE-based company would spend $15 million in the Faisalabad Special Economic Zone (SEZ), which is part of the China Pakistan Economic Corridor (CPEC).

Bros Gas, a big company that provides liquid gas services, will invest in Dawood’s company, the tweet said. He said that the first phase of the three-phase project will be to build an Aerosol Propellant Gas (APG) plant. Pakistan will lessen its dependence on APG that comes from outside the country because of local manufacturing.

To make ADNOC lubricants for the first time, the plant will make refrigerant gas. He also said that the fact that foreign investments have been made shows that there is a good economic environment that is supported by good government policies.

The role of the Board of Investment (BOI) in making it easier for investors to come to the country was also praised.

Create 70,000 jobs and hire 400,000 skilled workers in the Faisalabad Special Economic Zone (SEZ) in four years. This zone was set up last year. There is going to be a tallest building in Lahore built by the Dhabi Group from the United Arab Emirates.