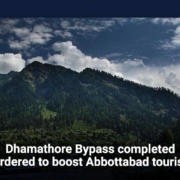 Dhamathore Bypass project construction should be finished as soon as possible, according to news sources. The Frontier Works Organization (FWO) has been asked to finish the project as soon as possible. The goal is to minimize the traffic and boost tourism in Galiyat.

Afterward, the DC gave a briefing about the bypass and the road that links Galiyats to the rest of the country. According to the DC, speeding up project building is essential for the tourism business in the area.

A bypass is being built by the FWO, Nespak, and the Departments of Communication and Works. Everyone at the meeting was told that they had to finish the infrastructure construction by May so that summer tourists could enjoy the area. The crowd was also told that the government plans to build a police station on the bypass to keep drivers safe.

DC Marwat told the right people to do something about encroachment near the planned bypass route in a separate meeting. To clear the drains, he also asked the Water and Sanitation Agency (WASA) and the TMA to set up teams of people to do the job. We’re told to be extra clean by drains at Ayub Medical Complex, Sethi Masjid, Jhangi, small businesses, Bilal Town, Jab Pul, and other places.