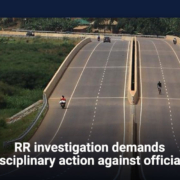 An order from the Establishment Division says that around 13 bureaucrats have been cleared in the scandal. This includes former commissioner Muhammad Mehmood and former land acquisition collector Waseem Ali Tabish.

The current government gave the investigation to Director General of the Civil Services Academy, Omar Rasool, who finished it in 60 days. The new report, which had three volumes and 882 pages, also said that Muhammad Mehmood should be set free. Prime Minister Shahbaz Sharif freed Muhammad Mehmood based on the new report.

According to the report, the new investigation looked at all the evidence and talked to 30 witnesses. The new study found no evidence that the Ring Road project was messed up in any way. However, it said that the initial fact-finding committee was influenced by Imran Khan’s close friends.

A new investigation has found that the former chief minister of Punjab, Usman Buzdar, agreed to change the Ring Road project’s route. It said that the change in alignment cost the government Rs30 billion. It said that based on the previous fact-finding report, the Punjab Anti-Corruption Department quickly filed a FIR and arrested former commissioner Capt. (Ret.) Muhammad Mehmood and land acquisition collector Wasim Tabish. However, the Lahore High Court released them because they didn’t have enough evidence against them.

In the first fact-finding report, former commissioner Muhammad Mehmood was accused of being involved in 20 cases of corruption by working with housing societies and getting kickbacks.

The report said that former commissioner Syed Gulzar Hussain Shah did not follow any of the rules and regulations given in the notice for the fact-finding committee. It noted that Shah made accusations about the Ring Road project without talking to other departments, put together the terms of reference for the committee himself, and wrote the report after doing the investigation himself, which was against the law.

The report said that no one testified against Muhammad Mehmood, the former commissioner of Rawalpindi.

The report was also very worried about how the then-chief secretary of Punjab, Jawad Rafique, was acting. It said that the chief secretary also showed up before the new committee and admitted that he was under a lot of pressure, which is why the rules weren’t followed.

The report said that 30 people were interviewed as part of the investigation. For the first time, the main suspect in the Ring Road scandal, Muhammad Mehmood, was given the chance to elaborate his side of the story, and all the evidence and statements were questioned by the other side..