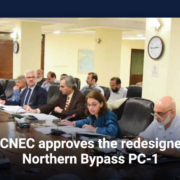 Islamabad: According to news reports, the third amended Project Concept-1 (PC-1) of the Northern Bypass was delivered to the Executive Committee of the National Economic Council (ECNEC) on Monday, August 15, for final approval. The project, worth PKR 28.779 billion, will be completed by June 30, 2024.

According to reports, three amendments to the new planned PC-1 have been sent, and they contain measures to:

The NHA Executive Board also gave its approval to the following road construction projects:

Allocation of PKR 429.649 million for the repair of flood damage on the N-90 segment between Alpuri and Besham.
Extension of the deadline for Lot 1, Lot 2, Lot 3, and Lot 4 civil works contracts from January 1, 2016, to March 30, 2018. The matter of Variation Order No. 02 should be handled by the concerned Member in accordance with the applicable Rules and NHA Code, as the NHA board does not have authority over it.
Allocating PKR 1.152 billion to build a new bridge over the Hub River on U.S. Route 25
The Global Head of Bridges and Culverts has already approved the allocation of PKR 575 million for AMP 2021–22.
Due to the emergent nature of the project, PKR 577 million will be used to procure work through direct contracts with State Owned Entities (SOEs) in accordance with PPRA Rule 42(f).