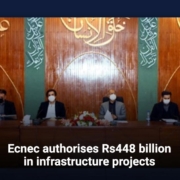 Ecnec authorises Rs448 billion in infrastructure projects. Ecnec approved four development projects on Monday, mostly in Punjab province, with a total estimated cost of $448.36 billion, mostly for projects in the city of Lahore.

Three of the four projects worth Rs322bn will be done in Punjab.

During the meeting that was chaired by Finance Minister Shaukat Tarin, the Ecnec agreed to revise the Greater Karachi Water Supply Project (K-IV) at the cost of Rs126.404 billion.

Pakistan’s Planning Minister Asad Umer, the Minister of Industry and Production Makhdoom Khusro Bakhtiar, the Adviser to the Prime Minister on Commerce Abdul Razak Dawood, Punjab Finance Minister Makhdoom Hashim Jawan Bakht, the Deputy Chairman of the Planning Commission Jehanzeb Khan, and other senior government officials were in the meeting.

It costs Rs322bn for four projects. Three of them are in Punjab.

These projects had already been approved by the Central Development Working Party (CDWP) on technical grounds. The CDWP then recommended that Ecnec give them formal approval.

Under the current financial rules, the CDWP can only approve projects that cost less than Rs10 billion. Ecnec can only approve projects that cost more than Rs10 billion after the CDWP has approved them on technical grounds. The Punjab Arterial Roads Improvement Programme (PARIP) was approved by the Ecnec. It will cost Rs129.944bn.

The project, which is being funded by the Punjab government, wants to build 535 km of dual carriageway highway sections between different cities in Punjab.

Across Punjab, the PARIP will be spread across Bahawalnagar, Bahawalpur and Layyah. Jhang, Toba Tek Singh and Vehari are also in the area.

Planning and Development Board, Punjab, is in charge of the project.

Some money for the project will come from the Punjab government. The Asian Development Bank (ADB) would give Rs64.972bn, and the Asian Infrastructure Investment Bank (AIIB) would give the rest.

The project will build a 535-mile stretch of a dual carriageway highway between cities in Punjab.

The project would include repairing the existing carriageway and building a new one in places where the “Right of Way” could be used and acquired. In order to make the transportation system better, the highway network will be upgraded and made into two separate roads.

Among the things that will be done are the construction of bridges, culverts and retaining walls, as well as drainage works, roadside facilities and other things.

The meeting also approved the Punjab Rural Sustainable Water Supply and Sanitation Project (PRSWSSP) for $553 million, but only if it was done in a shorter time and in a few tehsils first. The project will be done by the Punjab Rural Municipal Services Company in 16 tehsils in mostly southern Punjab.

The project is meant to help people in rural areas of some tehsils in Punjab get basic things like water, sanitation, and waste management.

The World Bank has already approved $442 million in financing for projects that will mostly be done in the southern districts of Punjab and help poor rural communities in Punjab get better water and sanitation infrastructure services.

The project focuses on rural areas, where water contamination and poor sanitation practises are more common, which leads to a lot of sickness and child stunting.

In the poorest parts of Punjab, the World Bank thinks the project will help more than six million people in rural areas to reduce child stunting and address areas that are at risk of drought and water scarcity.

Ecnec also approved the Kharian-Rawalpindi Motorway project to be done on a build-operate-transfer (BOT) basis under a Public-Private Partnership (PPP) mode for a total cost of Rs95.81bn, which is how much it will cost.

The project wants to build a four-lane, access-controlled 117.20-mile long motorway from Kharian to Rawalpindi.

Ecnec has also agreed to the K-IV, 260 MGD Phase-I of the Greater Karachi Bulk Water Supply Scheme at a new cost of Rs126.405bn.

It was later changed and added to the Karachi Transportation Plan (KTP) with the same 260 MGD capacity but a new sponsoring and executing agency in 2021.

The project is meant to meet Karachi’s growing need for water and build a reliable and long-term water transportation system from the Keenjhar Lake, which is more than 100 miles away.