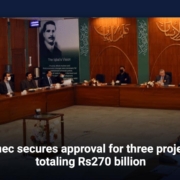 ISLAMABAD: Sindh and Punjab provinces have been fighting over how much water each gets. On Wednesday, the Ecnec (Executive Committee of the National Economic Council) approved three projects worth Rs270 billion, including the second phase of the Greater Thal Canal and other projects.

Also, the meeting of Ecnec led by Finance Minister Shaukat Tarin approved a project in Khyber Pakhtunkhwa worth Rs30 billion to help poor people in that area.

Staff who work on development projects and are paid on a Project Pay Scale will get a 75% raise in their pay packages (PPS).

It also decided to use the right amount of money from the total budget for the projects in the PSDP to run an effective media campaign to make people aware of the Federal Government’s policies, projects, and initiatives that are meant to improve the lives of the people.

The meeting was attended by Energy Minister Hammad Azhar, Punjab Minister for Irrigation Mohsin Leghari, the Deputy Chairman of the Planning Commission, and other high-ranking government officials.

Controversial: The Greater Thal Canal has been given the green light.

The meeting agreed to build the Greater Thal Canal Project (Phase-II). The Ministry of Planning said that after meeting with representatives from the governments of Sindh and Punjab, it had come up with about half a dozen recommendations. ECNEC gave the project its blessing in principle at a cost of Rs38.372bn on December 22, 2021, and it will go ahead.

It was told that if water is given to provinces based on the principle in Para-2 of the 1991 Water Apportionment Accord, all of the projects in the WAA could be done. Due to a lack of water, Sindh says that the construction of the Greater Thal Canal (GTC) could make Sindh’s water shortages even worse because of the agreement.

The Indus River System Authority (Irsa) has again, by a majority vote, said that there will be enough water for GTC in 2021. “Irsa has made available enough data to show that there is enough water in the system,” said the planning ministry. The water should be used by provinces within their share of the water.

Because water projects are important, Ecnec approved the structure for implementing the GTC. At the same time, a credible monitoring system was set up to make sure that Punjab didn’t overspend.

Before the telemetry system can be installed, the Pakistan Council for Research in Water Resources (PCRWR) will keep an eye on the flow of the Indus River in the Chashma-Taunsa-Guddu (including Panjnad) reach. This will happen right away. Until the telemetry instrumentation is in place, fully installed, and tested by field teams that could include the third party, this would be how it would be done. People at Irsa would pick up the tab for this monitoring tool.