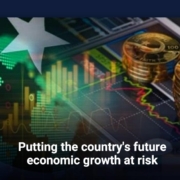 Progress toward achieving the Social Development Goals is a vital measure of a country’s readiness for steady, sustainable future economic growth (SDG). This statistic reveals a harsh reality for Pakistan: the country’s progress is just ahead of Afghanistan and far behind India, Iran, Sri Lanka, and Bangladesh.

In all 17 selected categories, including health, education, women’s empowerment, and the environment, public sector spending — primarily from yearly development budgets — contributes 90% of the investment in attaining 2030 SDG targets. This means that, over the following nine years, our governments will be required to set aside massive development resources — year after year — to reach SDG targets. Failure to meet these targets would jeopardize economic growth for the next nine years and for a long time afterwards, especially because countries with low SDG rankings would likely be treated differently by international financial institutions — economically and politically — than countries with higher rankings.

The seriousness with which Pakistani administrations approach expanding their revenue base is generally shaped by their immediate need to balance their budgets and earn political mileage by undertaking certain politically advantageous large-scale projects.

The obvious answer is that governments fail to generate enough income, resulting in a fiscal deficit, and to manage this deficit, they keep development spending low and, worse, don’t mind cutting it in times of financial hardship.

However, this straightforward response invites more questions: why do governments fail to create sufficient revenue? Year after year, why does the budgetary deficit exceed the budgeted target? Why are governments not reducing their administrative costs? Why don’t so-called austerity measures work? Why can’t debt servicing costs be decreased, and what can be done, above all, to rationalize the “non-combatant” defence budget? Honest soul-searching on these topics might help us figure out how to keep development spending from being reduced.

The seriousness with which Pakistani governments approach expanding their tax base is rarely motivated by a sense of responsibility for Pakistan’s economy. It is frequently shaped by their immediate need to balance the budget — and earn political mileage by implementing certain politically advantageous, large-scale initiatives. As a result, many of the efforts used to broaden the total revenue base lack economic merit.

For example, in order to increase overall revenue, the former PML-N administration issued high-denomination bearer bonds with denominations up to Rs40,000. The plan was to gather a large amount of non-tax money in order to boost overall revenue. From the startup, it was clear that this move would add to the growth of our already substantial shadow economy.

Another example of prioritizing “what is easy” over “what is good” is amnesty packages announced in the name of raising tax revenue. Whether these plans are delivered in a democratic setting, by a despot, or in the days of hybrid democracy, they have a higher opportunity cost than the benefits they provide. (The same may be said of succeeding governments’ so-called austerity measures.)

90 percent of the investment in reaching the 2030 SDG targets comes from the public sector.

It’s no surprise, then, that whenever Pakistan seeks financial assistance from the International Monetary Fund (IMF), the IMF expresses reservations about our “homegrown” revenue-boosting schemes and demands that they be reversed — as in the case of high-value bearer bonds — or fundamental restructuring, as in the case of the PTI’s “amnesty scheme” for builders and developers.

In light of the foregoing, the IMF’s recommendation that the government reduce development spending from Rs900 billion to Rs700 billion in 2021-22 makes logical. This isn’t the first time the Fund has made such a demand — and, unfortunately, it may not be the last. Whenever we enter another IMF programme, Fund authorities will press the current administration to slash its development budget, withdraw/ rationalise “unjustifiable” subsidies with significant opportunity costs to the economy, or come clean about “amnesty schemes” or “phoney” revenue-boosting methods.

However, in order to do this, parliamentary democracy must be enhanced, and economic decisions must be made more inclusive, with input from all federating units, regardless of political differences. Moreover, annual development plans should not be the only thing cut amid a financial crisis.

When we look at Pakistan’s GDP growth over the last 50 years, we can see that, except for once (between 2010 and 2018), the country’s economy has never grown continuously for more than five years in a row. However, one of these is a reduction in development spending as a percentage of GDP.

The State Bank of Pakistan, in partnership with the government and reputable economic think tanks, may consider conducting a study to see if and how cuts in development spending affect economic growth in Pakistan in the coming years.