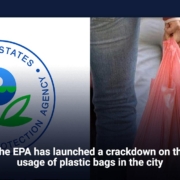 The EPA has launched a crackdown on the usage of plastic bags in the city. There has been a campaign to stop people from using polythene bags in Islamabad city, a source said on the 1st of April.

Read more with EL news : Zakaria A. Zia is chosen president of the Islamabad Industrial Association

For the project, the agency has set a fine of PKR 210,000 and has seized almost 200 kilogrammes of polythene bags this year. The group wants to make the capital a plastic-bag-free city, and they have collected fines of up to PKR 70,000 in March because people use them.

Sadia Munawar, the EPA’s deputy director, said that four EPA teams have been making surprise visits to a lot of markets and taking strong action against people who break the rules. She also said that in 2021, the agency levied more than PKR 560,000 on the people who didn’t pay.

Read more with EL news : UAE will expand its hospital capacity in Sindh, according to an envoy

The EPA deputy director also said that the fine would double if the people who broke the rules again did it again. Also, if people are caught using plastic bags, they will be fined PKR 5,000.