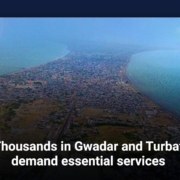 Thousands in Gwadar and Turbat demand essential services. Thousands of people from various areas of Gwadar and Turbat staged a protest demonstration on Thursday against the lack of basic amenities such as drinking water, health, and education facilities, and rising unemployment in Gwadar and other Makran divisions areas.

General secretary of the Baluchistan chapter of Jamaat-i-Islami Maulana Hidayat-ur-Rehman Baluch presided over the Gwadar protest procession. It eventually grew into a large public gathering at Shuhada Jewani Chowk.

Maulana Baloch strongly criticized the government and the authorities on the occasion, stating that successive governments had failed to resolve fundamental issues affecting the people of Makran. Gwadar over the last 70 years. Thousands in Gwadar and Turbat are in desperate need of basic services.

Read more with EL news : Amounts of waste pile up in the capital, causing difficulties for the residents

“We are demanding basic rights for the people of Gwadar and Turbat, which the rulers have usurped. The people have been deprived of drinking water, health, and education facilities. Local fishermen have also been unable to earn a living since the government allowed large trawlers to fish off the Makran Coast.”

According to the JI leader, it was the state’s responsibility to solve the masses’ problems, but it had failed to do so for the last 70 years.

“I declare jihad against the atrocities and injustices perpetrated against the people of Gwadar and Makran,” the Jamaat leader declared.

He stated that despite the construction of the Gwadar seaport, the area’s residents remained jobless. The government had done nothing to alleviate their plight.

He stated that thousands of people had gathered here from remote areas of Gwadar and Kech districts. They had taken to the streets to pressure the government to ensure fundamental rights such as jobs, clean drinking water, and education.