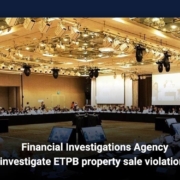 FIA will look into ETPB property sale irregularities. The Supreme Court on Tuesday directed the Federal Investigation Agency (FIA) to investigate the Auditor General of Pakistan’s (AGP) report alleging over Rs77 billion in irregularities in the sale of 7,143 urban properties owned by the Evacuee Trust Property Board across the country (ETPB).

A two-judge Supreme Court bench led by Chief Justice Gulzar Ahmed was hearing a case filed by Dr Ramesh Kumar Vankwani, patron of the Pakistan Hindu Council (PHC), alleging that the highest court’s directions on the protection of minority community property were not being followed. The court directed the FIA to perform the investigation within one month.

The directive was granted when the apex court learned that the AGP uncovered the anomalies despite the ETPB’s failure to cooperate fully and share only half of the information with the auditors.

The court directed the ETPB to cooperate fully with the AGP by providing all necessary documentation and assistance.

The AGP was asked to re-open the ETPB accounts audit and finish it within two months.

Dr Vankwani informed the court that the country has 1,809 temples or shrines, of which 588 were Gurdwaras and 1,221 were Hindu Mandirs, the majority of which were inoperable. All of these properties cover an area of 109,369 acres and are estimated to be worth Rs219 billion, of which 75,055 acres have been leased to various parties.

The Sindh inspector general informed the court that a FIR had been lodged against Dr Vankwani on the basis of a report of death threats.

Dr Vankwani informed the court of the threats on Monday, adding that a week ago, three men arrived at Crystal Apartments in Bath Island, Karachi, in two Hilux double cabins, assaulted his guard, and threatened him. According to the application, this incident was filmed on a CCTV camera. However, the court decided the case.

Advocate Ikram Chaudhry, representing the ETPB, informed the bench that the board has filed a report with the court outlining its ownership of 48,000 properties across the country.

The court also ruled to reopen the subject of payment for the construction and restoration of Shri Paramhans Dayal Ji Maharaj’s (Teri Temple) Samadhi in Karak, Khyber Pakhtunkhwa, after a month.

Dr Vankwani stated in an application that despite directions from the ETPB to pay Rs38 million to the Pakistan Hindu Council for building and restoring the Samadhi, the board had failed to do so.

The application argued that the council spent its own money on the construction and renovation of the temple following the ETPB’s inability to do so despite prior Supreme Court directives.

The overall repair cost was Rs40 million, but the KP government provided a grant of Rs2 million.

The ETPB had failed to pay the remainder of Rs38m despite the passage of more than eight months since the order’s date, the application stated.

It asked the court to compel payment from the ETPB and to institute contempt proceedings against the board.