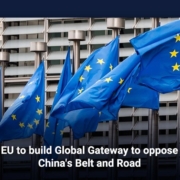 “Global Gateway aims to mobilise up to 300 billion euros in investments between 2021 and 2027… by bringing together the EU’s, member states’, European financial institutions’, and national development finance institutions’ resources,” according to a commission paper.

The funds will not come from the EU or member states’ coffers, and the proposal will require support from international institutions and the private sector to achieve even a fraction of its goal.

China announced its worldwide investment strategy, dubbed Belt and Road, in 2013, as a signature project of President Xi Jinping. Beijing stated that by 2020, it would have invested $139.8 billion, including $22.5 billion last year alone.

Officially, it seeks to create land and marine infrastructure that will improve China’s connectivity to Asia, Europe, and Africa for trade and development, and it has partnered with other countries.

The West, on the other hand, views it as a means for China to exert influence over poorer countries. They accuse Beijing of pushing emerging economies to incur excessive debt and argue that the opaque contract procedure is prone to corruption.

The EU policy is an outgrowth of a concept unveiled in June at the industrial powers’ meeting in Cornwall by the G7 countries to provide poor countries an alternative to the Belt and Road.

EU Commissioner for International Partnerships Jutta Urpilainen defended the bloc’s record, telling reporters that European development aid was “quite close” to the level of Belt and Road funding between 2013 and 2018. Along with raising finances, the EU plan intends to transfer European technology and experience to emerging economies.

“We want Global Gateway to be a trusted brand that stands out for its excellent quality, consistent standards, and high level of openness and good governance,” Von der Leyen explained.

“We are adamant that this will ensure that investment has a tangible impact on the ground. And this is done in a sustainable manner.”