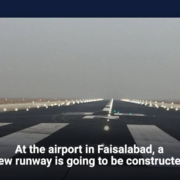 FAISALABAD: Airport Manager Muhammad Anwar Zia said that the new runway at Faisalabad International Airport will be finished by October of this year. This will allow Boeing 777 planes to land.

On Thursday, he told the Faisalabad Chamber of Commerce and Industry (FCCI) that work was also being done on the air cargo complex and that 75 percent of the work should be done before the runway can be used.

Zia was happy with the number of passengers and air cargo, and he said that 102 domestic and international flights were running smoothly out of Faisalabad airport.

He said that the old runway could only fit small planes, so the government built a new one for wide-bodied planes because they expected the number of passengers and air cargo from the city and its surrounding areas to grow.

He also said that construction work on the air cargo complex had begun and would be finished this year at the request of the FCCI.