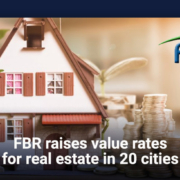 The Federal Board of Revenue (FBR) has raised property valuation rates by 10–30% in more than 20 cities and some rural areas to make them the same as the DC rates. This was reported in the national dailies on September 20.

According to the details, the World Bank (WB) put this condition on a USD 400 million loan called “Pakistan Raises Revenues”: that the valuation tables for properties had to be changed. It was said that the new valuation rates will make it easier to get more taxes from properties that can’t be moved. The source of the news said that the FBR’s notified rates are lower than the fair market value at the moment.

During the fiscal year 2022-2023, the FBR is said to have raised the values of properties in different cities. It was said that the areas of Islamabad Capital Territory (ICT) that had been exempted before will also be included in the new valuation rates. Now, the board has changed the prices in cities like Dera Ismail Khan, Rawalpindi, and Attock.

It’s important to remember that in the past, the FBR has changed the property valuation rates in 40 cities so that they are the same as the values given by the DC in those cities.