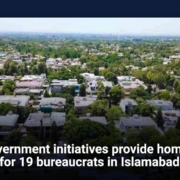 Government initiatives provide homes for 19 bureaucrats in Islamabad. While the Islamabad High Court has barred top bureaucrats from receiving more than one plot at taxpayer expense, data reveal that 588 senior officers in grades BS-20 to BS-22 have obtained magnificent double-story residences at subsidized prices.

ON MONDAY, the IHC temporarily halted allotments in Islamabad’s new sectors and submitted the matter to the federal government for a review of the propriety of allocations to bureaucrats and judges.

The federal government wanted to review such allottees’ “entitlement’ to assure compliance with Article 25 of the Constitution, ensuring everyone has an equal opportunity.

Additionally, a huge number of them have been fortunate enough to secure expensive plots – a few have obtained two properties — in Islamabad’s sectors F-14 and F-15, according to documents obtained by Dawn.

According to a statement released by the PHAF, the organization’s purpose is “to assist in developing modern community living with all the conveniences and amenities of the twenty-first century at an accessible cost for the medium and low income groups.”

The PHAF has a long history of developing low-cost housing plans for its members, and this was the first time it launched a scheme specifically for senior bureaucrats in a neighborhood.

It may note that in 2016, the then-prime minister annulled the allocation of “preferred” apartments in the same neighborhood to influential bureaucrats and ordered an investigation into the PHAF’s “manipulated balloting.”

The IHC, on the other hand, suspended all allotments save for those impacted landowners.

At a recent post-cabinet meeting press conference, the federal communications minister described the attempt to house the ruling class on the property of impoverished villages as sad. According to him, the government is examining the matter in light of the IHC ruling and has also established a committee.

Federal Minister for Law and Justice told that would review the allotments light of the IHC ruling that deemed the distribution of more than a plot to civil officials unconstitutional under Article 25 of the Constitution, which guarantees equal treatment to all.

The FGEHA was founded solely to provide housing for federal government employees. However, on Nov 8, 1999, Justice Nawaz Abbasi of the Lahore High Court’s Rawalpindi bench specified conditions for granting plots to journalists and higher court judges when hearing a case involving the acquisition of land in Sector G-13.

Initially, civil servants were limited to a single plot. However, in 2006, the then-prime minister permitted each BS-22 officer two plots. Subsequently, the Supreme Court’s judges each claimed two plots. Recently, the IHC suspended the policy of second plot allocation and sent the subject to the federal cabinet. Government initiatives provide homes for 19 bureaucrats in Islamabad.

Interestingly, during the FGEHA balloting for the two new sectors, 19 bureaucrats in the BS-22 grade were each assigned two plots. They had each been allocated a two-story house under the PHAF scheme. As a result, each of these fortunate bureaucrats obtained three home units.

When contacted, PHAF Managing Director Amir Mohyuddin stated that he was unaware of previous allotments because he joined the post on July 1 and then attended the obligatory promotion training.

However, a PHAF officer informed Dawn that officers were assigned grey structure houses before applying for FGEHA plots on a first-come, first-served basis. Government initiatives provide homes for 19 bureaucrats in Islamabad.

Mohammad Irfan Chaudhry, the spokesman for the FGEHA, said the allotments were done in compliance with the PHAF and FGEHA’s policies. According to him, the policy permitted the PHAF to allot a flat or “grey structure” to government personnel in addition to a plot.

However, an insider stated that the federal government never approved the regulation authorizing such allotments.