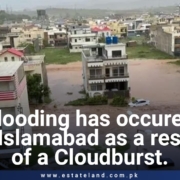 At least two persons were murdered in Islamabad on Wednesday due to urban flooding induced by a cloudburst.

Cloudburst in Islamabad has caused flooding in several areas; Islamabad Deputy Commissioner Muhammed Hamza Shafqaat a weather update on his official Twitter feed. Teams are working to clear nullahs/roads. We should be able to finish everything in one hour.

The DC afterward announced that the highways in Islamabad were open to traffic.

After severe rains pummeled the federal capital and Rawalpindi for hours, videos from the E-11 and D-12 sectors of Islamabad show cars floating in rushing waters.

During the current monsoon season, the twin cities received the most rain.

According to Pakistan Meteorological Department sources, up to 330mm of rain fell in some districts of Islamabad in the last several hours.

Summoned the Pakistan army to Rawalpindi, which is on high alert. Following heavy rains that produced a high flood in Nullah Lai, the local authority requested military assistance in Rawalpindi.

Army forces are aiding civil administration in rescue and relief activities, according to the report.

”We have flood contingency measures in place to deal with any flooding situation.”

According to a National Disaster and Management Authority representative, informed local government and emergency services to deal with potential problems after heavy rains in Rawalpindi and the danger of possible flooding in Nullah Lai.

In Sector E-11, a mother and her son drown. Water infiltrated residences in Islamabad’s Sector E-11, killing at least two people, including a minor.

According to the affected family, when a nearby drain overflowed, and water flooded their home, four children and their mother drowned.

According to them, three children were saved by the administration, while one youngster and his mother died. However, CDA has no authority over E-11. Meanwhile, the flooding in Sector E-11 is due to the poor performance of the housing society.