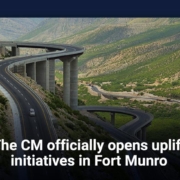 During his visit to Fort, the chief minister laid the foundation for a solar-powered lighting network, parks, and horticultural projects with a combined estimated cost of Rs100 million. He also dedicated the Rs290 million Fort to Langar Khund Sar road project, which cost Rs290 million.

The Fort resort will be upgraded at the cost of Rs50 million, according to plans. In addition, Chief Minister Buzdar laid the foundation stone for a project under which they would spend Rs90 million on the renovation of the Fort Munro water supply scheme to permanently fix the water shortage at the tourist attraction.

The chief minister lay the foundation stone for a project to enhance tourism in the Koh-e-Suleman region, complete in the coming months. He also laid the foundation stone for a Rescue 1122 station at Fort, a long-standing demand of the local community and estimated to cost Rs50 million. In addition, officials provided the Chief of Staff with an update on the Fort Munro Cadet College, the welfare complex, and other ongoing initiatives.

Read more with EL news : The Commission recommends that groundwater be conserved in KP

Buzdar, accompanied by Senate Chairman Sadiq Sanjrani and Minister of State for Climate Change Zartaj Gul, participated in the Clean and Green campaign by planting trees at the Senate lawn.

During his speech, he declared that a new cadet college would be erected in Koh-e-Suleman and that work on the feasibility study for the project had begun. According to the minister of education, children from the Koh-e-Suleman area would be able to enroll at no cost, and the government would cover the costs of their boarding and other fees.

The chief minister stated that efforts were underway to establish a solid waste management firm to address cleanliness in the Fort Munro region permanently. The construction of 108-kilometer highways in the Fort Munro and Koh-e-Suleman areas, according to him, is also underway.