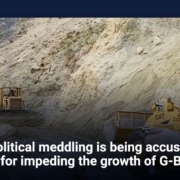 Political meddling is being accused for impeding the growth of G-B. Gilgit-most Baltistan’s successful development project, the Economic Transformation Initiative (ETI-GB), had to be shut down because of political interference, which has been blamed on the government.

The ETI G-B was a seven-year development project funded by the G-B government and co-funded by IFAD. It cost Rs12 billion and was meant to boost regional economic activity through agricultural value chain development.

During Hafeezur Rehman’s government, however, things started to go wrong when the government started to fall apart and bureaucracy got more powerful. The bureaucracy and the current PTI government are said to have tried to get rid of the project’s top people, which put a stop to it.

IFAD’s country director in Pakistan, Hubert Boirard, sent a letter to the ministry of economic affairs in Islamabad on Tuesday saying that ETI-GB should have a “winding down action plan.” This is a new development in the case.

Read more with EL news : The establishment of a riding club in the DHA Peshawar

Economic affairs should work with the ETI-GB lead agency to make the ETI-GB winding down action plan, he says in a letter to the secretary of the ministry of economic affairs, Mian Asad Hayaud Din. This is how it works:

Further, he said that on November 9, 2020, the G-B government said that it wanted to keep ETI-GB going. No-cost extension: IFAD agreed to this if: I the ETI-GB agribusiness development component 2 is fully operational; (ii) the 162 cooperatives already contracted with ETI-GB don’t miss the 2022 agricultural campaign; and (iii) farmers benefiting from 42,000 acres of new land developed under the ETI-GB will get official land titles as agreed to in both the IFAD/GoP Financing agreement and the ETI-GB PC1. This is what happened.

“As of today and six months before the end of the ETI-GB project, both conditions are not met,” he said, adding that the risk of losing the 2022 agricultural campaign for the 60,000 households supported by the 162 cooperatives is very high (end of March 2022).

It was Hafeezur Rehman’s job to be the chief minister, but now he says that the current government wants to sabotage this project to make his government look bad. President of IFAD Gilbert F Houngbo was told about the situation, but it didn’t help.

Sources who were aware of the development say that a former secretary of planning made it hard for the ETI management to hire staff and do other things.

18 other jobs have been empty for two years because the planning department hasn’t been interested in them, says the insider.

Also read: G-B is going to start building water channels to help the agriculture sector grow, so read that.

For the last year or so, it hasn’t been made to hire a chief engineer or DPC. The sources say that Dr. Ahsanullah Mir, the regional head, led the project for more than five years. During that time, the team provided 49,000 acres of barren land with water from glacial melt. “The important thing is that the cost of that project was less than 25% of the estimated cost in 2014.”

In three years, some 20,000 acres of dry land got water from 50 irrigation channels, and the rest is in the final stages of being built.

G-230 B’s Agricultural Cooperatives were formed and registered, making them the first time in the history of G-B that this happened. He didn’t forget to mention that through a team-based approach, they solved longstanding technical, financial, and operational problems. During the first four years, the ETI-GB gave out more than $40 million in grants with a 30% efficiency rate and a cost of less than 10%.

He told the Express Tribune that he didn’t know about the letter. “The G-B government had almost met IFAD’s demands on many sectors,” he said. “We will look into the letter in detail to figure out our strategy.”