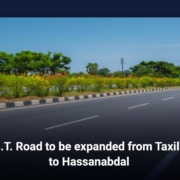 In an open kutchery at the TMA complex, he stated that the N-5 project of the National Highway Authority would be presented to the federal cabinet for budgetary approval at the next meeting.

His statement went on to say, “With an allocation of Rs130 million, the Taxila-Hattar road, which is 10.80 kilometers in length, is slated to be finished in the next few months.”

Noting with concern the deteriorating law and order situation in the city, he instructed the police authorities to offer protection to the residents of Taxila and Wah against armed robberies. G.T. Road to be expanded from Taxila to Hassanabdal.

His statement stated that the law and order situation in the area was deplorable and that the police department’s performance was not sufficient, particularly in the elimination of drug lord dens and armed bands of robbers. The G.T. Road between Taxila and Hassanabdal will be widened.

He also took significant notice of the drug trade in the city, particularly the sale of ice. He appealed to the public to alert him and the city’s administration of any elements involved in the trade and their white-collar clientele.

The fact that police personnel was refusing to register robbery cases was also something he took seriously.

The G.T. Road between Taxila and Hassanabdal will be widened. It would be really helpful for people of nearby areas.