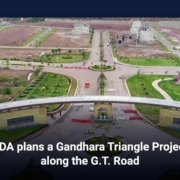 People in charge of the city have decided to start a project called the “Gandhara Triangle Project” on the Grand Trunk Road to make money that can be used to buy land in Zone III.

It’s said that the CDA told the federal commission that it is supposed to change the master plan of Islamabad about the project’s specifics.

They said at a meeting of the commission on Friday, it was noted that the money from the project could be used to buy land in Zone III.

Zone III is made up of about 51,000 acres out of the total of about 20,000 acres of land that hasn’t been bought or given away. The commission talked about different ways to buy land in Zone III and make new bylaws for Sub-Zone ‘D’ of Zone IV.

The money from the scheme will be used to buy private land in Zone III, a meeting was told.

The sources say that the commission wants to send a summary to the federal government about the land that hasn’t been bought yet in Zone III. It was said that the CDA won’t force people to give up their land. Instead, the locals won’t be able to sell their land on the open market.

Those who live in a city will be told that they can sell their land whenever they choose to do so to the CDA. The CDA will pay them according to rates set by the Real Estate Regulatory Authority (RERA). The land that was bought from the locals will be added to the national park area, making it bigger.

This isn’t true, though. The commission thought that there would be no pressure on people to give up their land for the CDA. Instead, they thought that it would be up to them whether they wanted to use or give up their land. But they won’t be able to sell the land on the open market unless the federal cabinet gives them the go-ahead.

Read more with EL news : Monal Islamabad to be transformed into a nature preserve

It was told by CDA officials that if the federal government lets locals keep their land from being sold in the open market, the CDA will pay them when it gets money from the Gandhara Triangle project.

If someone wants to sell his house, he doesn’t know what he can do about it yet. There was no plan to decide the fate of houses.

During the last meeting, the voluntary acquisition of land in Zone III was talked about, a member of the commission told Dawn.

As you can see, this is very clear: “We will not be forced to buy things.” However, a proposal is being worked on that could be brought to the cabinet for the government to buy land on its own, he said.

A retired officer of the planning wing, who didn’t want to be named, said the plan didn’t seem to work because there were a lot of people living in Zone III, like Shah Allah Ditta, Kot Hatyal, Bhara Kahu, and Banigala.

The CDA should make bylaws like those for Zone III and Zone IV’s sub-Zone D, he said. Other than the populated areas of Zone III park, there isn’t any private land in Zone III that isn’t owned by the park. It should also be paid to the land owners after they get their money from the Gandhara Triangle Project,

It’s in Zone I. It’s at the start of Margalla Road in Sangjani, on the border of Zone I and Zone III. CDA officials told Dawn that the project is in Zone I.

They said the site was near GT Road, next to B-17, and the triangle-shaped scheme, which covers 74 acres, has a lot of room for a lot of money. The plan has five apartment towers, a mega shopping centre, farmland plots, a movie theatre, and more.

It has a lot of potential because it is in a good place. An official from the CDA said that GT Road and Margalla Road are both ways to get to the area.

It was planned a long time ago, but the civic agency didn’t start it because of the influence of some housing groups, said the officer. There are plans now for it to be used by people who work for a city agency, he told me.

CDA plans a Gandhara Triangle Project along the G.T. Road.

The commission also talked about Zone IV’s sub-zone D. Over 23,000 acres make up the sub-zone. It could provide housing for a lot of people. The commission agreed to talk about it at its next meeting.