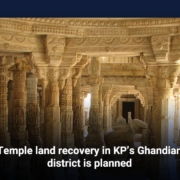 Temple land recovery in KP’s Ghandian district is planned. The district administration has planned to clear encroachment on the land of a historic Hindu temple in Ghandian.

“We have begun demarcating the Shiva temple’s land to prevent encroachment, and once completed, better services will be provided to visitors,” Nazima Shaheen, additional deputy commissioner (finance), told reporters Tuesday.

Ms Shaheen, who visited the temple with revenue collectors and communication and works department engineers, stated that washrooms and waiting rooms would be constructed on the reclaimed land.

She stated that the administration desired to promote religious tourism in the district and hoped that improving visitor services would accomplish this goal.

According to the official, the deputy commissioner would meet with Ghandian area elders to resolve their land disputes.

She stated that the federal government recently released Rs4 million for the purpose of constructing a mega hall on the property.

Ms Shaheen stated that the temple, which dates back to the Stone Age, would be safeguarded and equipped with necessary visitor amenities.

She stated that minority MPA Ravi Kumar was in contact with the district administration regarding Hindu devotees’ concerns. Temple land recovery in KP’s Ghandian district is planned.

Meanwhile, approximately 795,000 children have been vaccinated against measles and rubella by the district health department. Additionally, it provided anti-polio drops to 268,000 children as part of a special campaign.