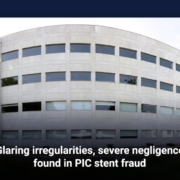 The FIA finds ‘glaring irregularities and gross incompetence’ in PIC’s expired stents scheme. The Punjab Institute of Cardiology’s (PIC) former head, chief pharmacist, catheterization laboratory officials, consultants, and internal auditors were all found to be involved in “glaring irregularities and grave negligence” in the use of expired stents to treat cardiac patients, according to the Federal Investigation Agency (FIA).

“The implicated persons gained immensely at the cost of innocent cardiac patients’ lives,” according to the FIA.

Read more with EL news : One of the most talked-about projects in Ravi was scrapped by the LHC

In accordance with the Lahore High Court’s prior directives, the FIA filed its “preliminary report” on Thursday.

During the examination, it was also discovered that the surgeons at the PIC benefited from “bogus angioplasties and insertion of cardiac stents where patients did not pass through the angioplasty procedure,” according to the report.

“Despite having information,” it continues.