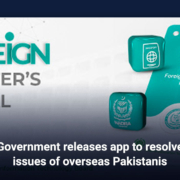 On Monday, at the Ministry of Foreign Affairs in Islamabad, he urged envoys to contact Pakistani diasporas and handle their issues quickly. FM Qureshi said all Pakistani embassies are online and active on Twitter, Facebook, and Instagram.

They launched the portal in conjunction with the Prime Minister’s Digital Diplomacy Agenda and the Foreign Minister’s Public Diplomacy Initiative.

The National Information Technology Board developed the app alongside the Prime Minister’s Performance Delivery Unit.

It will also launch a QR code and a digital system to reduce the chances of document forgery and verification using courier services within Pakistan. It would also help verify a power of attorney for Pakistanis living abroad. The project plans to set up Nadra counters in 16 foreign missions to issue succession certificates and administrative letters to expatriate Pakistanis.

The National Information Technology Board worked with the Prime Minister’s Performance Delivery Unit to create the mobile application, which is now available for download on the App Store.

It will provide services in the standard procedure for document verification, the introduction of the QR code, and the implementation of a digital system to reduce the likelihood of document forgery and the verification of papers sent through courier services within Pakistan.

It would also assist in the online authentication of power of attorney for Pakistanis living abroad who are represented by missions.