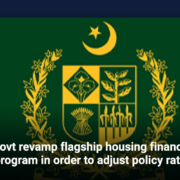 Finance Minister Miftah Ismail said on July 16 in Islamabad that the Mera Pakistan Mera Ghar (MPMG) program would be restructured to account for the higher interest rates. The Minister said that the government will make sure that nobody loses money as a result of the scheme’s reorganization.

Read more with EL news: The BoP will organize roadshows across the US to promote RDA

In a series of tweets, the minister is said to have explained why the home finance scheme was changed. He said that even though mortgage loans are available at much lower rates, market interest rates have gone up by up to 15%. According to what he said, the program can’t go on at the current offer rate because the government would have to pay a big subsidy. He said that people had written to him about the housing program and how they had spent their money after getting loans to buy homes.

It’s important to know that the government stopped processing and giving out cash under the program for two months to make it last longer. In a new agreement between the government and the International Monetary Funds (IMF), the government has been asked to get rid of subsidies in order to keep the economy stable.

Homebuyers have been able to get mortgage loans from the govt at much lower interest rates: 3% for the first five years, 5% for the next five years, and KIBOR+2.5% for the next ten years. The banks have already approved and given out a total of PKR 66 billion to potential homebuyers.