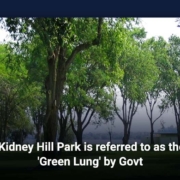 Kidney Hill Park is referred to as the ‘Green Lung’. The continuous efforts to transplant trees uprooted in various locations of the port city to Kidney Hill Park and the planting of fruit-bearing trees, bushes, and plants in the park can convert it into a Green Lung. This urban forest cleanses the metropolis’s air.

According to experts, Green Lung is necessary to tackle atmospheric pollution and rising temperatures in the coastal city.

Karachi, as a result of climate change, urgently requires a ‘Green Lung,’ ideally a forest, cultivated in its suburbs; however, given the ground realities, this may not be feasible; thus, a strategy of green covers scattered throughout the ever-expanding city is a viable option for addressing the associated challenges.

The attempt to protect trees that have been uprooted or simply cut down for various development schemes or expansion projects undertaken by government or private entities has flaws in the particular context of Karachi, which is divided into waterlogged, saline, and dry land zones, necessitating the transplantation of uprooted full-grown trees in specific areas that meet the conditions necessary for their healthy survival.

Dr Rafi ul Haq, a senior plant ecologist, emphasised the importance of a scientific approach to tree transplantation as well as the cultivation of saplings and seedlings, noting that due to the limited supply of land, soil properties are critical for the full and proper growth of trees, achieving the target of robust and sustainable green cover with little or no risk of stunting, damage, or loss of valuable resources such as finances, labour, and time.

“How can we ever forget that precious trees uprooted from Garden West as part of the road expansion scheme were relocated to a dedicated site off M.A. Jinnah Road but failed to thrive, resulting in massive loss to nature and ecology,” the consultant with extensive experience working for the IUCN and other reputable organisations reminded.

In the case of Kidney Hill Park, which spans 62 acres of kidney-shaped human land, the scenario was quite different, as it emerged as a unique type of public facility that underwent a massive scientific transformation as a result of its evacuation from almost all categories of encroachers via Supreme Court intervention, paving the way for support from various stakeholders led by the then Municipal Commissioner of Karachi.

Shamim Bano, a mother of four who visits the park daily for her morning walk, expressed her awe at the rapid transformation, stating, “This is like something wonderful being developed in ruins with a range of flora and fauna – hundreds of plants, trees, and shrubs attracting birds – an added charm for nature lovers and children.” She was similarly impressed by the extra work put into landscaping, which included canopies of shrubs and the development of numerous routes. Each is equipped with necessary fixtures (essentially benches) and is named after a different national landmark.

Two important paths, Kokan and Dhoraji, are named after the surrounding communities, instilling a strong sense of belonging in visitors.

Faran Sangrani, a resident of Dhoraji Colony, stated that over the years, he and his neighbours were unaware of a pervasive sense of fear and apprehension caused by the presence of anti-social elements. A sizable piece of the abandoned park was informally converted into a rubbish disposal site, while others had occupied a sizable portion with creating cattle corral and tea stalls.

“The Supreme Court was a tremendous help, as it would have been nearly impossible to demolish facilities created by powerful people,” recalls Amra Javed, a senior activist representing Shehri – CBO, which works to safeguard the environment and citizens’ fundamental civic rights.