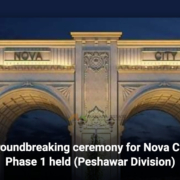 Nova City Peshawar Phase 1 (Peshawar Division), which is a modern and up-to-date way of life, had its ground-breaking ceremony today. After that, formal construction of a modern and far-reaching business venture project has begun at the site. Nova Group, which has projects going on in Islamabad and Lahore, has moved into KPK to help the people there live in a more modern way and improve their lives.

Chairman NOVA welcomed the distinguished guests from all walks of life and thanked the people of KP for their huge response. He said again that the NOVA was determined to make changes in Pakistan’s real estate market. He told the crowd about plans for the future and how entertainment, business districts, schools, international hospitals, and farm houses would be added. A study is being done to see if it would be possible to make electricity from running water. He said he would work day and night to make sure that people in KP could live in a way that was up-to-date and based on their rich cultural heritage. He also said that NOVA’s foreign partners will put a lot of money into their projects in July.

The Nova City is near the Charsadda interchange on M-1, which makes it a great place to live for people from Peshawar, Nowshera, Charsadda, Mardan, and Sawabi. They can enjoy the modern amenities and be close to the main cities.

Junaid Afzal, Chairman of Nova Group, spoke at the event. He said that the foundation stone of the city, which was put in today, would give the local community access to world-class homes and modern amenities.

A lot of people from nearby towns and cities, as well as many well-known people from Pakistan, went to the big event. Plots were put up for a vote, and the people who won were told, which added to the excitement of the grand launch event. At the end of the event, there was a big fireworks show that was one of the biggest and best Pakistan has ever seen.