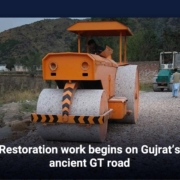 Restoration work begins on Gujrat’s ancient GT road. According to news reports, reconstruction work has begun on the historic Grand Trunk (G.T.) Road near Kathala Railway Crossing, where the road was in the poorest condition.

Locals and merchants have petitioned for the repair of the G.T route that passed through Gujrat city. Additionally, it was reported that the Gujrat city was spreading towards the Kathala railway crossing, near the Chenab River, necessitating road renovation.

Deputy Commissioner Mehtab Waseem Azhar disclosed facts about the project, including the road’s route from Kathala Chenab to Rehmania Bridge and over the Bhimbher stormwater channel.

According to reports, the Punjab government approved the rehabilitation of the G.T. road at a cost of PKR 1 billion on the advice of Federal Minister for Water Resources Moonis Elahi. Initially, the project was budgeted for with PKR 250 million from Punjab’s yearly development budget. The project, according to the responsible authorities, will be completed within a year.