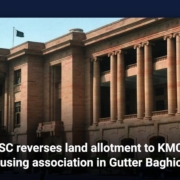 The bench had taken up the case of unlawful allotment of amenity plots for commercial and residential purposes in the Gutter Baghicha area.

Karachi’s administrator has been directed to immediately collect 200 acres.

At the court’s most recent hearing on Dec 28, 2021, Shehri’s Amber Alibhai informed the court that the entire acreage of Gutter Baghicha was intended for amenity plots.

On Tuesday, the Supreme Court noted that the approval granted to the society for the allotment of plots was probably issued by a section officer, as the approval letter made no reference to the competent authority certifying the allotment.

According to the statute, such amenity plots could be used solely for educational, religious, or welfare reasons beneficial to the area’s residents, but the cooperative society was neither an individual, an organization, or a government entity, the court noted.

The court stated in its decision that allocating plots to the housing organization did not fall within the scope of welfare reasons.

According to the court, the KMC allocated 200 acres of Gutter Baghicha to its 80 employees.

During the hearing, senior counsel for the society stated before the apex court that the organization housed around 300,000 individuals and cautioned that it should also examine the fundamental rights of widows who would be rendered homeless in the event of an unfavorable court ruling.

Additionally, the lawyer stated that the current action was brought at the direction of individuals responsible for the Lyari gang warefare.

The court made it clear, however, that the SC had to protect the interests and fundamental rights of Karachi residents and also hinted that the court would also hear cases involving the illegal allotment of lands to different societies that were originally owned by the Pakistan Railways and numerous other government departments.

Earlier in December, at a hearing in Karachi, the court ordered the authorities to immediately restore Gutter Baghicha and remove any encroachments. “For a city of 30 million people, there should be at least 300,000 parks,” the top justice observed at the time.

This is the same case in which the court had ordered Murtaza Wahab’s dismissal as Karachi’s administrator, stating that Wahab had failed the city’s residents. However, following two public apologies from the administrator, the court reversed its decision and directed Wahab to keep politics separate from his employment.

In 1993, the NGO Shehri filed a petition with the Supreme Court alleging that the KMC society unjustly acquired 200 acres by turning the Gutter Baghicha amenity property to industrial, residential, and commercial usage, thereby destroying the environment.