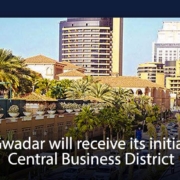 News sources said on November 1 that the Gwadar Development Authority (GDA) has decided to open its first Central Business District (GBD) to encourage business in the coastal city.

The Central Business District will cover 12.3 square kilometers and cost an estimated PKR 90 billion. GDA Director General (DG) Mujeebur Rehman Qambrani said at a special session called “Gwadar and the Road to Sustainable Development” that the project will be finished in the next 10 years and that it could bring in about PKR 400 billion. He said that the project would have all the modern, cutting-edge infrastructure needed to support the large industrial base and meet future needs.

He said that 100 megawatts of solar power from Iran will be used to power the project. He said that the project will go well with other CPEC plans, such as Asia’s largest airport, which will open in 2023, plans for a safe city model, oil and gas infrastructure for smart energy modelling of the city, maritime tourism, and many plans for ferry transportation and freight, as well as a railway network connecting Gwadar to Karachi and other parts of the country.