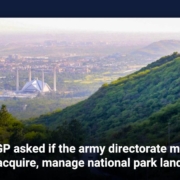 The instruction responded to an appeal by Messers Monal Group of Companies, which argued that the company had entered into a new lease deal with Remount before the lease agreement with the Capital Development Authority (CDA) expiring on Aug 31, 2021.

The petitioner company owns and operates the Monal Restaurant, a famous dining establishment located within the protected area. The veterinary directorate, Remount, is responsible for breeding and procuring remount animals (horses) to meet the army’s requirements, as well as fodder production, animal holdings, provision of milk and milk products to troops, arrangements for the procurement of green and dry fodder for farm cattle and dry fodder for army animals, as well as breeding beef and mutton animals and supplying them to the armed forces.

According to IHC, the CDA appears incapable of allowing building or granting leasehold rights in a protected area.

The five-page order, authored by IHC Chief Justice Athar Minallah, directed the court office to notify AGP Khalid Jawed Khan to explain the status of the Remount Directorate and whether it is legally permitted to own or manage state land, particularly within the protected area of the national park, as notified under the Islamabad Wildlife (Protection, Preservation, Conservation and Management) Ordinance 1979. (IWPCMO). The case will be reheard on Nov. 9.

Additionally, the court instructed the interior ministry, the CDA, and the Islamabad Wildlife Management Board (IWMB) to nominate top officials to explain why the directorate was permitted to execute a lease agreement within the notified park with what legal authority.

Additionally, the court required the CDA and IWMB to submit reports and notify the court of any illegal building or activity conducted within the national park in violation of the IWPPCMO’s terms.

The court made it clear that if the Remount Directorate fails to convince the court of its jurisdiction to issue leasehold rights within the notified area of the national park, it will explain why the high court cannot require rent deposit before the concerned trial court.

Read more with EL news : Islamabad’s Rent Control Act to be approved by Parliament this week

The court expressed regret that the panel of lawyers representing the Monal Group of Companies, namely advocates Saad Hashmi, Sajidur Rehman Mashwani, and Yawar Mukhtar, we’re unable to convince it that the company could have entered into a lease agreement with the Remount Directorate lawfully during the term of the CDA-granted lease.

“It also appears, on the surface, that the Remount Directorate cannot lawfully acquire state property following Article 173 of the constitution as read in conjunction with the Military Lands Manual, nor can it issue leasehold rights.”

According to Article 173 of the constitution, any property purchased for the federation or a province vests in the federal or provincial governments.

“It appears prima facie that the CDA also cannot permit construction or give leasehold rights on any property that is located within the National Park region,” the judgement stated, adding that the property at the centre of the leasing dispute was located within the protected national park’s boundaries.

Additionally, the court highlighted several Supreme Court decisions that stated unequivocally that no illegal activity or construction be permitted within the notified area of the national park.

Additionally, a constitutional petition filed in 2014 challenging the national park’s status and the responsible authorities’ failure to protect it from harm is pending before the high court, the order noted, emphasising that the issues raised for adjudication in the instant appeal and petition were connected to the issues raised in the present case, the resolution of which could have adverse consequences in light of climate change and environmental degradation.

On May 19, 2020, a five-judge Supreme Court bench presided over by Chief Justice of Pakistan Gulzar Ahmed halted the expansion of the Monal Restaurant and directed the CDA to transplant trees that were felled during the development restore the area to its original state.