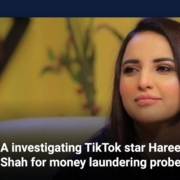 The FIA is investigating TikTok singer Hareem Shah. The Federal Investigation Agency (FIA) opened a money laundering investigation against TikTok actress Hareem Shah on Wednesday after she claimed to have travelled from Pakistan to the United Kingdom carrying a large sum of cash.

Shah can be seen sitting down with two stacks of British pounds in a video initially published on social media app Snack Video. Upon displaying the money, the social media celebrity stated that this was the first time she had travelled from Pakistan to London with a “big sum.”

According to the website of the Federal Board of Revenue, a traveler may bring any amount of foreign currency into Pakistan, however “taking out foreign currencies is permitted unconditionally up to $10,000.”

Condemning Pakistan’s recent currency decline, Shah added that people feel “sad” when their rupees are converted to euros or dollars.

“The administration had promised to boost the currency’s [worth] and the [Pakistani] passport’s [value], but they did nothing. They could only communicate verbally “‘She stated.

The TikTok celebrity then advised anybody planning to travel with large quantities of money to exercise caution. “They apprehend you,” she explained, adding that her circumstance was unique.

“Nobody addressed me and, as you know, they cannot. I arrived quite quickly “She continued, noting that in Pakistan, laws applied exclusively to the impoverished.

After Shah’s video was extensively shared on social media, a Sindh FIA representative stated in a statement that an investigation into money laundering had been opened against her.

Shah travelled from Karachi international airport to Doha, Qatar on January 10, according to the statement.

“The FIA has decided to issue a letter to the UK’s National Crime Agency requesting action against Hareem Shah, whose true name is Fiza Husain,” according to the statement.

It noted that “the illegal transfer of currency falls within the scope of money laundering.”

According to the FIA statement, the investigation into Shah was initiated pursuant to foreign exchange rules, and her “visa, immigration, and travel documentation have been collected.”

“The FIA has launched an investigation and requested information from Pakistan Customs and the Airport Security Force as well “According to the FIA’s spokeswoman.

This is not the first time Shah has been afoul of the law. Authorities initiated an investigation against her in October 2019 after she posted videos of herself in a conference room at the Ministry of Foreign Affairs.

The development sparked eyebrows, inquiries, outbursts, and concerns about social media security. Shah later stated that she entered the conference room with permission.

“They should not have permitted me to film if it violated norms and regulations,” she added.