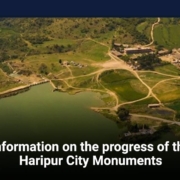 Haripur: Tabina Tariq, the city’s Additional Deputy Commissioner for Finance and Planning, gave a report on the progress of five monuments being built in different parts of the city to make it more beautiful.

Read more with EL news :Access to some sections of Islamabad for Pakistan Day Parade

According to the information, two monuments have been finished, while work on three others is still going on. According to the deputy commissioner, the construction work should be done in the next few months.

After the provincial government agreed to the makeover plan, private businesses are said to have been chosen through an e-tendering process.

A hundred-year-old tree was uprooted in Haripur village to build a road.