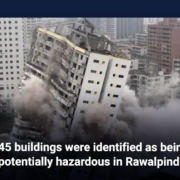 The people who live in these old buildings, some more than 100 years old, have been told to leave before the monsoon rains start.

As the pre-monsoon season is coming up, the authorities have sent red notices to the owners and tenants of old multi-story buildings that have been deemed dangerous, telling them to leave by June 10.

Since the 1960s, six to eight families have paid low rents to live in these multi-story buildings. Unfortunately, when it rains hard, the roofs of these buildings start to leak, and when there is a small earthquake, the whole building shakes and trembles.

These two- to three-story buildings were built before Pakistan was even a country.

In Mughal Sarai and Raja Bazaar, there are also big old shops and markets.

Two tenants have also gone to court to try to get rid of these notices. Many of these dilapidated buildings are also owned by the Auqaf department. The department receives a small amount of rent, between Rs500 and Rs1,000.

If one of them becomes available, the new rent, based on the market, could be up to Rs30,000. Because the rents are so low, the people who live there are putting their lives at risk to save money and not leave.

When it rains hard, the people who live there lock their doors and stay with relatives in the city.

Most years, during the monsoon, one or two buildings fall.

The Auqaf department says that it can only fix the buildings when the people who live in them move out.