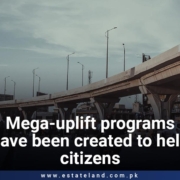 Work on various mega-uplift programs have been created to help citizens. Punjab Chief Minister Sardar Usman Buzdar, updated the Lahore legislators on the progress of development programs by DG LDA Ahmed Aziz Tarar and MD WASA Syed Zahid Aziz. The public representatives praised the recent development efforts and hoped that the citizens would benefit from them. They stated, “It is encouraging that the development plans were established in conjunction with MPs while putting aside the politics of the one-man show.”

Meanwhile, the CM expressed concern that they had launched the development work and mega-uplift program to help citizens without prior deliberation and preparation. As a result, he noted that people are suffering the repercussions of projects initiated without assessing public needs. He regretted that the PTI-led government had devised plans through sustained planning and claimed that the exhibitory projects strain the public kitty.

Similarly, would build a mega-uplift sewage line with over Rs.1 billion from Chungi Amar Sidhu to Hadiara Drain. These plans are critical for the city and will finish the development work on schedule, he added. However, the CM decided it is crucial to know that general requirements are prioritized before beginning exhibitory projects for personal projection.

Meanwhile, an older woman and her grandson met with Punjab Chief Minister Sardar Usman Buzdar to inform him. The CM listened carefully and instructed the staff to resolve the issues. The woman who had come to see the CM thanked him and prayed for him. The CM stated that the people of backward areas are close to his heart because he comes from such a region and is familiar with their issues. He said, “Public service satisfies me.”

Read more with EL news: Punjab village councils would have a 30% budget for development projects