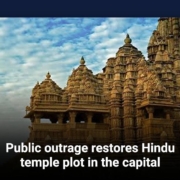 Public outrage restores Hindu temple plot in the capital. The Capital Development Authority (CDA) came under fire from the public on Monday to cancel an allotment to construct a Hindu temple and cremation center at H-9.

However, within hours, city authorities were forced to withdraw a notification canceling the plot.

The four kanals at H-9/2 were allocated to the community in 2016 to construct the federal capital’s first Hindu temple, crematory, and community center.

On Monday, during a case hearing in Islamabad High Court (IHC), CDA’s counsel Javed Iqbal informed the court that the civic agency had already cancelled the land for the Hindu community in February for failing to commence building.

Following this, the CDA faced criticism from both the mainstream and social media, causing it to remove the notification and restore the plot within a few hours.

The CDA asserts that the plot cancellation occurred as a result of a misreading of the cabinet’s decision.

CDA spokesperson Syed Asif Raza stated that in light of a federal cabinet decision, all land allotments to various offices, universities, and other organizations that have not yet begun construction have been annulled.

However, the civic agency’s staff understood the cabinet order incorrectly and cancelled the land allocated to the Hindu community. He stated that because authorization had already been granted for the construction of a border wall on the site assigned for the temple, the federal cabinet’s decision did not apply. This property did not fit into the category of undeveloped land, he added.

The spokesperson also shared a copy of the new allotment letter, which stated: “The subject plot allotted for temple, community center, and cremation ground for Hindu community in Sector H-9/2, Islamabad, remains valid despite the cabinet decision dated 22-09-2020, as construction work on the subject plot was initiated following approval of CDA dated 21-12-2020.”

“In light of the foregoing, the Directorate of Estate Management II’s letter of 15-2-2021 is thus retracted ab initio.”

When asked whether the CDA would launch an investigation into those who misconstrued the cabinet’s decision, he stated: “In fact, there was no malice involved in this case. There was some uncertainty and misinterpretation around the cabinet decision, and when the situation was brought to the attention of senior officials, the allotment was quickly restored.”

He said that it was every citizen’s legal and constitutional right to practise their faith, and the CDA had been instrumental in this regard.

In July last year, following a significant backlash from rightwing groups critical of the government’s decision to build a Hindu temple with public funds, the CDA abruptly halted the community’s construction of the boundary wall surrounding the property.

However, the issue was settled in December when city officials granted the group permission to raise the boundary wall surrounding the proposed location.

The December approval letter stated: “Permission is hereby granted to construct a perimeter wall around the Hindu community’s cremation ground at H-9/2 in compliance with clause 4.1.1 of Islamabad Capital Territory’s Building Control Regulations 2020.”

Islamabad does not have a Hindu temple or cremation center. The CDA allocated the four kanals to the community in 2016 following extensive community efforts and on the order of the Pakistan Human Rights Commission.

In the past, Saidpur village had a temple, but it was abandoned decades ago.

The letters of cancellation and later restoration addressed Preetam Das, the previous president of Islamabad Hindu Panchayat. Last year, a Hindu Panchayat team led by President Mahesh Kumar met with the CDA chairman to advise him that the Council of Islamic Ideology had approved the construction of burial in Islamabad.